What is Sleep Apnea?

What is sleep apnea? Sleep apnea occurs when a person's breathing is either shallow or stops while one is sleeping. The pauses can range from a few seconds to minutes. The word "apnea" actually means "without breath". When normal breathing resumes, it is usually accompanied by a snort or choking sound. If you sleep with someone else in your bed, pay attention as those plagued with the disorder are usually unaware. 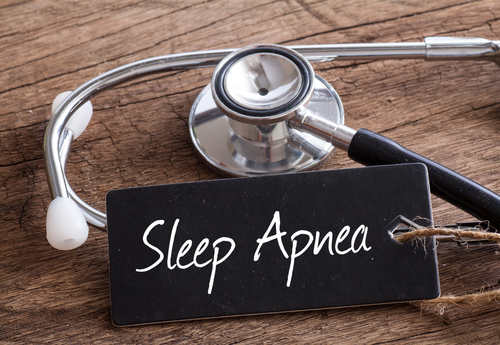 This sleep disorder is usually chronic and occurs most nights of the week. Deep sleep is interrupted leading to fatigue during the day. Although the person may think they got a complete 8 hours of sleep, due to the disruption in the deep sleep stage, quality rest is not achieved

Sleep apnea is very common. In fact it is as common as adult diabetes and affects over twelve million Americans. If you are overweight, past 40 years of age, and a male, your risks are higher, however it can happen to anyone. The condition often goes undiagnosed as the sleeper is typically unaware of their condition, they only know that they are tired during the day.

There are three main types of sleep apnea. This sleeping disorder is categorized as Obstructive, Central, or Mixed. The causes and possible treatments will vary with each type.

The one thing they all have in common is that a person stops breathing while sleeping. As a result the amount of oxygen taken in while sleeping decreases. The result is low oxygen blood levels. The lack of oxygen is what signals the brain that it needs to breathe again.

Although the apnea sufferer does not wake up during these episodes, it is the interruption of the REM (rapid eye movement or deep sleep) cycle that causes the daytime fatigue and tiredness. 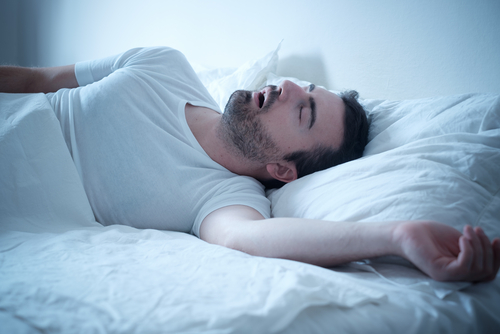 Sleep apnea is categorized as Obstructive, Central, or Mixed.

(OSA) is the most common and usually accompanied with snoring. It can occur in any age group and in both men and women. OSA occurs most in those who are overweight however there are other physiological reasons for it as well. They are: 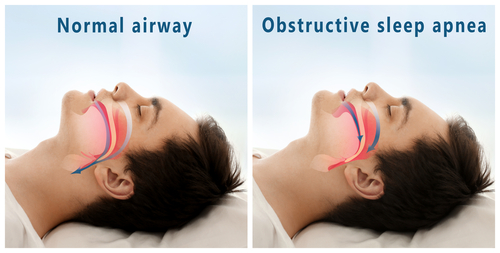 5. Small Airway Opening at Back of the Mouth

The obstruction occurs when the airways are blocked due to the soft tissues in the back of the throat collapsing during sleep.

Breathing temporarily stops followed by a noisy gasp, a snore, or a snort to restore breathing and oxygen levels.

Central Sleep Apnea occurs when the brain fails to send a message to the muscles to breath, but the airways are not blocked. This condition can be experienced by someone who has had a stroke or a traumatic brain injury. Other neurological conditions such as Parkinson's, ALS and Alzheimers can also be associated with this sleep disorder. However some people can have it for no known reason.

Because the airways are not blocked, but rather are open, there is no snoring. However, sleep is disrupted just as it is with obstructive sleep apnea, so daytime drowsiness and fatigue are still experienced.

Mixed Sleep Apnea is exactly what is sounds like, a combination of the two. The brain will awake the person to resume breathing interrupting quality sleep.

An accurate diagnosis and treatment plan is essential for those with sleep apnea. Find a sleep specialist if you feel you or your loved one may be suffering from this sleep disorder.

Prevention of sleep apnea can save you and your body from many physical problems.

Do you know someone who has sleep apnea? Do you see how they struggle through the day, feeling sluggish and fatigued? Sleep apnea prevention follows basic healthily practices and using good sleep hygiene. The risk of developing sleep apnea increases as we age and with weight gain.

The prevention of sleep apnea is possible by making some lifestyle changes. The vast majority of those with sleep apnea are overweight. However, it can become a viscous cycle since there is little motivation to exercise to help with weight loss, when one wakes up extremely exhausted. If the pounds are creeping up on you, take action sooner rather than later to get to your healthy weight.

It is much healthier to prevent sleep apnea than it is to develop it and treat it.


Sleep Apnea Prevention begins with early intervention, and with the onset of early warning signs. Either maintain or lose weight if your are overweight. Ask your bed partner to pay attention to your snoring or changes in snoring, a louder snore, or heavy breathing.

Symptoms of sleep apnea are more than just feeling exhausted the next day. 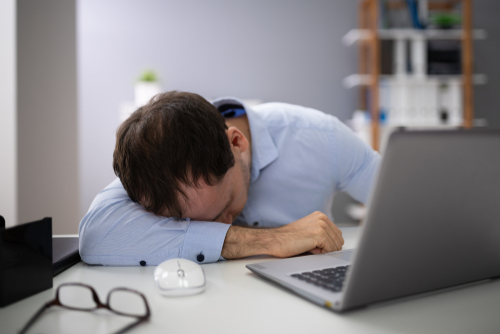 Heart failure risks increase or worsen. Incidents of on job accidents and falling asleep at the wheel also increases.

Do you remember what a good night's sleep was like before your sleep apnea symptoms started appearing? Did it accompany a gradual or sudden weight gain?

Weight loss can help to prevent sleep apnea or even reverse it.

Sleep apnea and weight gain when combined can be a vicious cycle. Lack of sleep means less energy and motivation to workout, which can lead to added weight.

Excess pounds, especially around the neck and throat can lead to sleep apnea and a worsening of the condition.  Excessive fat around the neck can contribute to narrower airways, increasing the risk of obstruction, resulting in lesser symptoms when weight is lost.

One test for sleep apnea is to have the patient's neck circumference measured.

In fact a recent study revealed that losing weight may be the single most effective way to reduce obstructive sleep apnea (OSA) symptoms according to the American Journal of Respiratory and Critical Care Medicine.

Losing weight is not that easy for those suffering from the side effects of sleep apnea.

Losing weight is certainly possible and desirable, but it may be more challenging for a couple of reasons. Tiredness and fatigue from a lack of quality sleep leads to less energy. Most people who have untreated sleep apnea just don't have the desire or energy to exercise.

Treating sleep apnea or reducing the severity of sleep apnea symptoms can sometimes be as basic as losing a few extra pounds.

In fact a recent study revealed that losing weight may be the single most effective way to reduce obstructive sleep apnea (OSA) symptoms according to the American Journal of Respiratory and Critical Care Medicine.

Although losing weight is not as easy as popping a pill, it is cheaper and more beneficial for your overall health. Surgery is not as effective and CPAP machines require high compliance.

The flip side of sleep apnea and weight loss is that losing weight may be more challenging. Tiredness and fatigue from a lack of quality sleep leads to less energy.

Make small easy changes. How often have you heard to park at the back of the parking lot, take the stairs, and get moving. Review your current eating regime. Are there changes you can make? Do you drink one too many sodas or make unhealthy snack choices at work? Evaluate your current lifestyle and habits, make a plan and commit to it. Find accountability. Keep your end goal in mind and stay focused.

A final note, sleep apnea and weight loss do not always coincide as there are other causes of sleep apnea besides being overweight.

The first step is to get started with a CPAP machine so that quality sleep will lead to waking up with more energy.

The best thing that you can do to start losing weight is to get good quality sleep. With uninterrupted sleep you will wake up with more energy and motivation to start an exercise program.

Find out from your doctor if he/she recommends CPAP for your sleep apnea.

Studies also show that decreased REM sleep can lead to increased food intake. Patients are unable to enter the necessary deep levels of sleep and remain their for the necessary length. Different studies have looked at the correlation with the amounts of quality sleep and eating. One of the major contributing factors in obstructive sleep apnea is being obese or overweight.

Along with the lack of REM sleep, weight gain and sleep apnea can be connected by the hormonal disruptions. Two important hormones, Leptin and Grehlin regulate the body's appetite and weight gain / weight loss mechanism. Both are affected with a lack of sleep. Leptin suppressed the appetite while Grehlin increases the appetite. Increased weight gain can occur following the onset of sleep apnea, as these hormones are no longer able to function properly. This imbalance is obviously disruptive. Lack of quality sleep leads to increased Grehlin in conjunction with decreased Leptin. Essentially the appetite increases and the body sends more signals to eat more.

You may be struggling with weight gain and sleep apnea while eating healthy and exercising, but your hormones may be working against you. This is another reason why addressing sleep apnea is important and talking to your doctor about how to deal with the disorder.

The average suffer of sleep apnea is an overweight male, over 40. Family history and a large neck are also contributing factors. Sleep apnea is more than an annoying snoring problem, rather if left alone it increases the risk of high blood pressure, heart attack, and stroke.

Set an appointment and start getting help. Weight gain and  sleep apnea are both treatable conditions. Reverse the cycle and instead of sleeping less and weighing more, start sleeping more and weighing less.

Can Sleep Apnea Cause Death?

Not only does sleep apnea affects one's quality of life it can affect one's life expentancy.  Untreated this condition will wreek havoc on one's health and in extreme instances death. Death however is often an indirect consequence. Sleep apnea contributes to a a number of health complications. The deteriorating health is due to a lack of quality sleep. With Obstructive Sleep Apnea the throat tissues either collapse or narrow. Blood-oxygen levels drop and the body's automatic response is a rush of emergency signals to wake up in order to resume breathing.

This can happen 30 times or hundred times or more a night. However the person does not typically fully awake and often unaware of their own condition. Over time the body becomes sleep deprived as it does not have adequate amounts of deep sleep due to the continuous disturbances in breathing.

Those who suffer from sleep apnea are at a much higher risk of a motor vehicle accident. As statistics and data varies, the conclusion is clear. If you or someone you know suffers from this condition, ask them about their "near misses" while driving. Drowsiness and driving are a dangerous combination. This may not strike all as a serious issue. However a study done by Alan Mulgrew, MD, and colleagues at the University of British Columbia in Vancouver with over 1,500 participants revealed that sleep apnea patients were almost five times more likely to have a serious car crash over those free of the condition.

Go from What is Sleep Apnea to Sleep Aid Resource Home

Copyright 2010-2022. www.SleepAidResource.com. All Rights Reserved. It is a crime to copy or reproduce any content or images on this website without prior written permission. Violators will be prosecuted to the fullest extent of the law. All Information is Free for Personal use, NON commercial use. 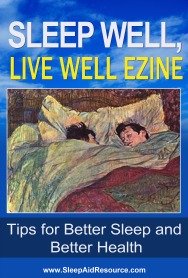 Get practical advice on how to fall asleep, stay asleep and to get deep sleep. It's free so sign up here: 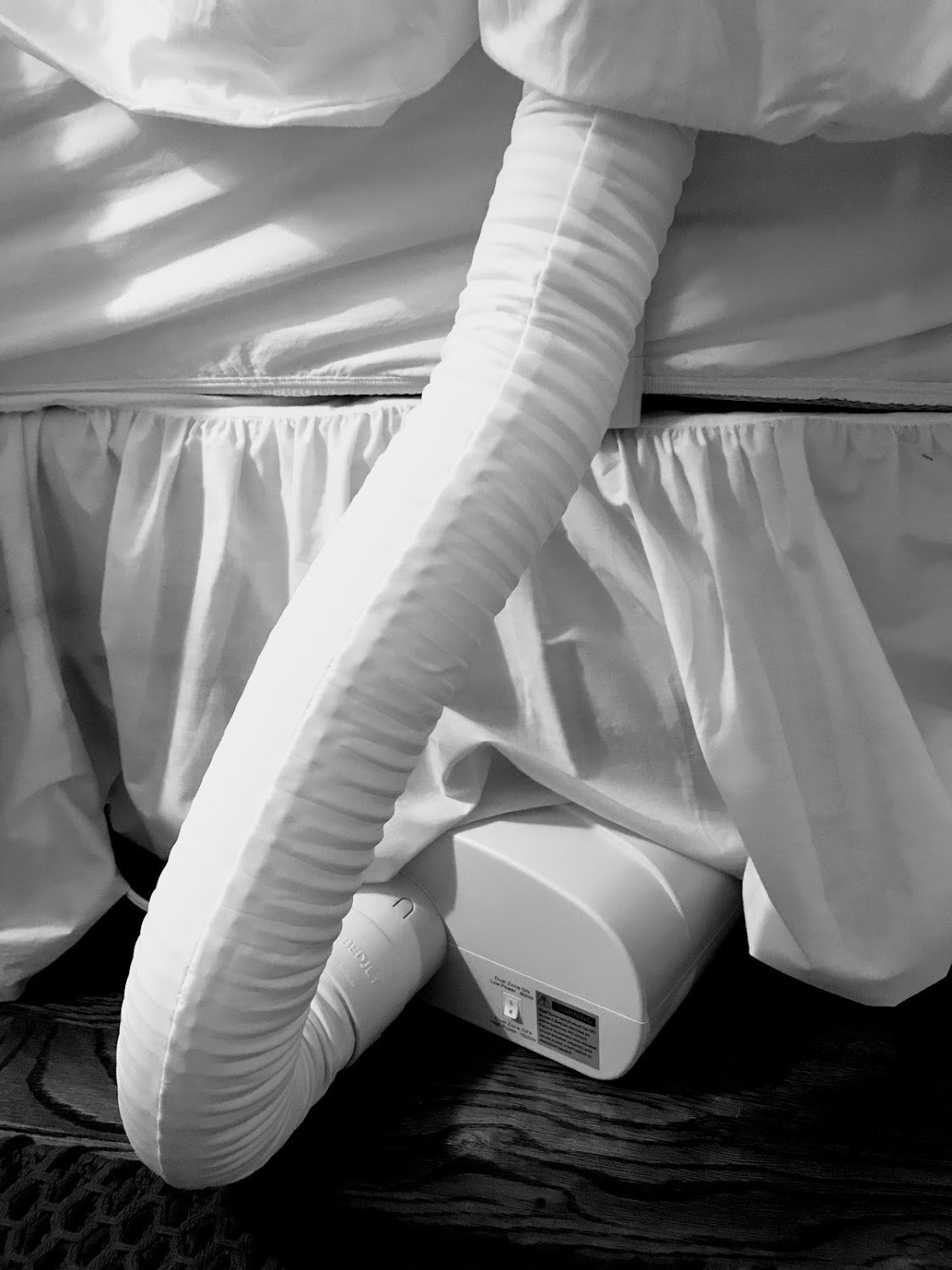